We practiced Aikido at 11 800 feet above the sea level and on a concrete floor instead of a mat. That’s how we started in September 1997 in what we called the Tenchi Dojo. What took us there? Our jobs, of course. I was working at the Machu Picchu Program, funded after a debt by nature swap between the Governments of Finland and Peru. The Program had as its main objective the conservation of nature and environment inside the Machu Picchu Historical Sanctuary.

The first time I visited the Machu Picchu Citadel -located in Cusco, in southeast Peru- was in 1987. I knew it was part of the Machu Picchu Historical Sanctuary (created in 1981,) which is a protected area, just like a National Park. The Peruvian government set aside Machu Picchu for its conservation due to the incredible attributes of the natural landscape and the diversity of plants and animals in the area surrounding the Inca Citadel and all the other Inca remains within its 32 592 hectares (80 537 acres.) The Machu Picchu Citadel is the most visited place in Peru, with about 1 000 visitors a day, and it is the main destination of a large percentage of the visitors who come to Peru every year. However, a very limited number of them realize that when they walk on the citadel they are also inside a protected area. 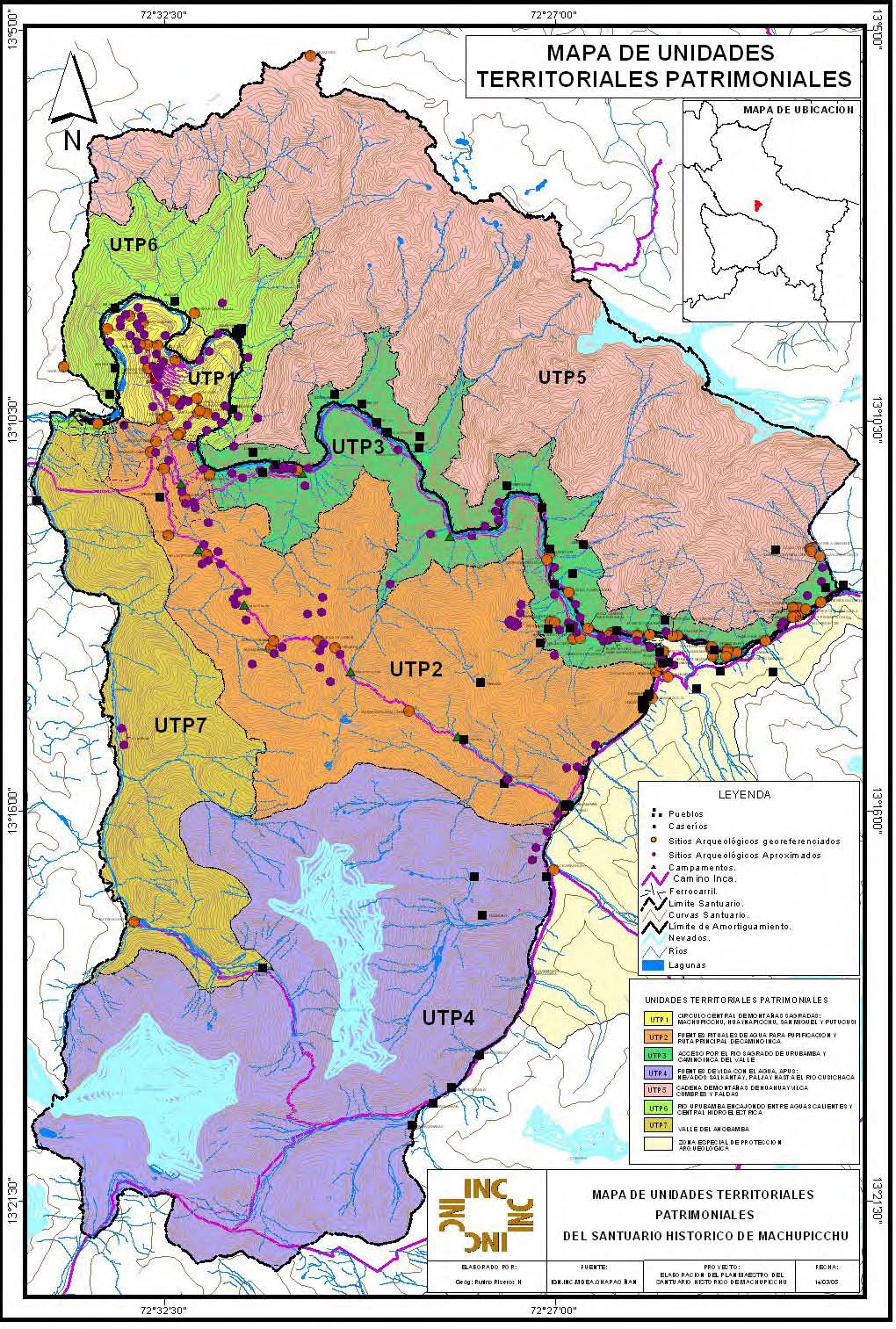 Some locals, who lived since the 19th century in the Urubamba River (a tributary to the Amazon), knew the citadel but did not gave it too much attention. In 1911, an expedition funded by Yale University and the National Geographic Society found the citadel. An explorer educated at Yale, California and Harvard had visions of and was thirsty for the discovery of the last Inca refuge. He prepared and led the expedition to the yungas or humid valleys of the oriental side of the Andes. Hiram Bingham was the western discoverer of Machu Picchu, one of the most important archeological sites left by the Inca people. He opened to the world a citadel built on a top of a ridge 1 640 feet above the Urubamba River which “… was lost for centuries because this ridge is in the most inaccessible corner of the more inaccessible section of the central Andes. No part of the highlands of Peru is better defended by natural bulwarks.” The Incas “… at some time in the distant past built themselves a sanctuary for the worship of the sun.” I won’t discuss the reasons the Incas might have to build a city on a place like that. You have to come to Peru and explore it by yourself. Nothing will compare to that!

The Sanctuary has ten different life zones, an ecological concept describing different types of habitat for plants and animals. The Sanctuary has a large snowy peak in the South (Salcantay) and a chain of snowy mountains in the North (La Verónica). It has grass highlands above 13 200 feet, called puna, and different type of tropical and subtropical forest. The main forest surrounding the Machu Picchu Citadel is referred to as cloud forest and it is habitat of the spectacle bear (the only south American bear) and the cock of the rocks (the national bird of Peru). Hiram Bingham reported that their collections included eighty species of mammals, approximately four hundred species of birds, twenty different species of snakes, ten lizards, and a variety of fish.

When I knew I was going to work there, one of my first thoughts was “where would I practice Aikido?” The city of Cusco is an enchanted place and I knew I was going to have a great time there. But, I also knew that Cusco had no Aikido Dojos. Happily enough, Cesar, my technical assistant at the Program, was a first kyu Aikidoist. He is also a very good friend of mine. Then, I already had known him for over 12 years. Our Sensei, Miguel Morales, gave him permission to start a dojo and to teach Aikido in Cusco. The arrangement turned out to be a little weird and sort of comical, because I was his boss on the office, but he was my instructor at the dojo. If I made him work too much, I thought, he would call me for ukemi. If he made me work hard on the mat (“lower your center!”) I could find “extra work” for him at the office. But no, it was never that way.

The first time we went together to the Machu Picchu Citadel, we spent more than an hour of the trip on the train watching the river through the window to see torrent ducks. We got to see a couple and recognized the male from the female (they are about the same size, but their feathers have different colors). We had a good time watching how the vegetation was changing as we were going downstream from the puna to the cloud forest. As altitude lowered, the temperature increased and so did humidity. Those are the factors defining the different types of vegetation you find in a gradient as you go down in your way to visit the citadel.

These changes are more obvious when you walk instead of taking the train. The Inca government had a net of trails going from the coast to the mountains, and from the mountains to the jungle. The net was so well designed and constructed that the Inca had fresh fish from the coast thanks to their post system: the chasquis were trained runners who took messages and special delicatessen to the Inca. The chasquis run segments of the trail to deliver the messages or the goods to another chasqui. Many of them run through the mountains so the Inca could eat the fresh fish. Today, one trail from that system is used as a hiking route towards the Machu Picchu Citadel. The Inca Trail is followed each year by thousands of tourist who enjoy nature and other archeological remains on their way to Machu Picchu.

Walking the Inca trail takes three to five days and allows the tourists to watch many of the 372 bird species sighted in the Sanctuary (after a report published in 1984.) When they cross the cloud forest before the citadel, they are able to see several of the 300 varieties of orchids present in the area. Diversity is one of the characteristics of the tropical and subtropical forests of the Sanctuary.

Cusco was our place to live, work and practice Aikido. The city is magic and enchants the visitors. People from all over the world go there (just like New York), to visit the wonders of the Inca Empire and the mixture and legacy of the Spanish colonial times. A good number of foreigners stay in Cusco for more than a month. Some stay longer (just like New York). Some of them liked the idea of practicing Aikido with us.

The first place we found to practice aikido was Cusco’s sports coliseum. We went there on a Saturday morning and, not having a better place, we started our practice on the wooden floor of the basketball field. We were doing basic stuff and were not taking ukemi. Suddenly, dozens of cops got into the coliseum. They were on the corridors up above from us. They were staring at us as we continued practicing. “What the hell are they doing?” we thought they were thinking. But they were silent and were observing our circular movements, and the effects of a well-applied nykkio.

Then, the Commander came where we were practicing. We had just met him some days before, during an activity related to the Machu Picchu Historical Sanctuary. He said hello and asked us what we were doing. We explained him what was that: a Japanese martial art. He encouraged us to continue doing our “sport” and after saying good-bye, started looking at the place to prepare the security for a competition that was going to take place there in a week or two.

On our next day of practice, we met the people from the Karate dojo. They were interested in practicing Aikido and we gladly accepted to practice in their dojo. At this point, we had at last a place to practice, and the place had a concrete floor. It took a couple of weeks to Sarah, who joined us from Lima, and me to start rolling when taking ukemi for Cesar. The first thing I learned about rolling on concrete is that you never, ever slap using your hand. We were so envy of the gymnasts, because they had a mat to practice.

On our third month in Cusco the opportunity to practice on a mat came about. At that time, the karate people had a better idea of the movements and fluidity Aikido has (they were stiff and they just couldn’t help it!). When we got into the coliseum, we saw a mat prepared for a gymnastics competition. You know exactly what I though. I looked at Cesar and I did not have to say a word. I went to talk to the coach and he said that there was no problem but that I needed to talk to the man responsible for the lights. I did, and he said that I had to pay S/. 25,00 Soles (about 10 dollars). I gave him thirty and I still think those were the best thirty soles spent in my life. You have no idea what faces the Karate people made when they saw Sarah and me taking ukemis on the mat. I think our demonstration opened their eyes to Aikido that day. And that is worth a lot more than thirty Soles.